byBrian Larson
You are here:
< Back

There are two (major) levels of government in the United States—the federal or national government and the state governments. Primary authorities are made at the federal and state levels and also at county, municipal, and other levels. As a result, there are interlocking hierarchies of authorities, a simplified depiction of which appears in this figure. 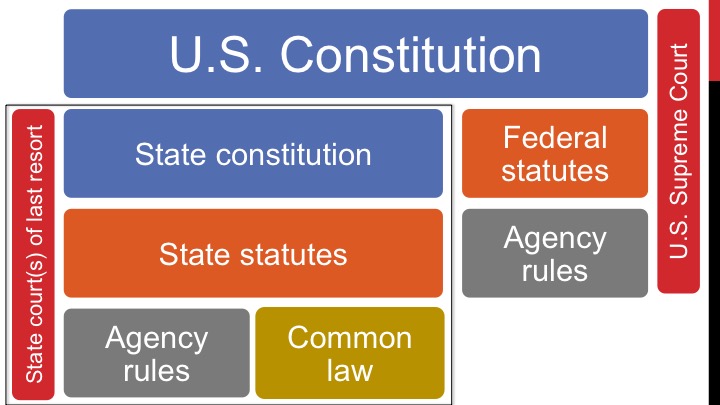 The elements of these hierarchies include:

There is one more kind of primary authority—a contract. Generally, a  contract is a bargained-for exchange between two or more parties; the contract creates legal rights and obligations only for the parties, and only the parties can go to court (or another kind of dispute resolution, like arbitration) to enforce those rights and obligations. Contracts are most frequently interpreted under the statues and common law of a particular state. As between the parties, a contract can supersede common law, statutes, and even the Constitution. For example, you might be entitled to damages for a tort that someone else commits, but if you sign a contract waiving that right in return for some other thing of value, the contract will prevent you exercising your rights under tort law.

Note that courts may interpret laws outside their hierarchies (fed- eral courts interpreting state law and vice versa) and systems at the state and federal levels sometimes interact in other ways, but we’ll save those discussions for when they happen in our cases.